Derek is the oldest of the three brothers.  He began writing songs seriously at the age of 18 and soon found that country music was the best way for him to express himself musically.  Many different influences from R & B to Rock to Gospel shaped him in the early years as well as the influence of parents who have a passion and love for creating music.

He now writes most of the material for the band and lives near Nashville, TN with his wife and boys.

Nate is the "live wire" of the group and always adds an interesting flare to whatever is going on.  He, like Derek, has a variety of musical influences and has played music from the earliest remembrance.  He has starred in high school musicals, led acapella groups to great success in Knoxville, and in general has a knack for performing and soaking up the spotlight.

Nate lives in East TN right now with his wife and kids.

Spencer is the youngest of the bunch and is about 10 years apart from Nate.  Derek remembers vividly the 3 or 4 years when their parents were gone playing gig's and he was entrusted with taking care of baby Spe and the rest of the kids.

He's all grown up now and add's the perfect pitch to top off the sound The Hinckley Brothers are known for.  Spence has written some great material himself and now lives in East TN with his new wife and baby girl.

Derek, Nathan, & Spencer have been singing three parts forever it seems.  From the time little Spence joined the trio at about age six these three bro’s have known that there was something really cool about what happens when they get together.  They’ve been on stage countless times and have spent some of their best moments together singing their hearts out.
Derek now lives in the Nashville area and has been the driving force behind this group and you can often catch him playing a writers night at a number of local spots in town.  Songwriting is a family affair for the Hinckleys as they've followed the lead of their parents who have written and performed professionally for many years.
The Hinckley’s are now planning a new CD release this year featuring their original country music.  In the time since the last release many songs have been written and lots of studio time has been logged.  This collection will be something truly special.

Derek, Nathan, & Spencer have been singing and living the musicians life since before they even had a choice.  Having parents who sang as a duo together professionally impacted the Hinckley Brothers like nothing else could.  From the time little Spence joined the trio at about age six these three bro’s have known that something very cool happens when they get together.  Not far from the stomping grounds of Kenny Chesney and Rodney Adkins, these brothers were raised in East Tennessee where their blood runs orange and where down home music lives.

Songwriting and performing are a family tradition for the Hinckleys.  Their parents have written and performed professionally for many years including at Dollywood for 10 years, the Opryland Hotel, and way back in the day enjoyed moderate radio airplay in the southeast for songs they recorded.  They tell the story about playing across the street from Randy Travis before he was "Randy Travis" and that he sent folks to Opryland to hear them!  It's no surprise that these three brothers have the same talents and abilities and they have embraced what made them who they are.

Influenced by artists and bands such as the Eagles, Alabama, Bryan White, Brad Paisley, and even R&B groups like Boyz To Men, The Hinckley Brothers have a wide ranging musical taste and it shows by the creativity that comes across in their songwriting and vocal arrangements.  To them great music is whatever sounds good to the ear and feels good to experience...and of course it has to have harmony!

In 2004 the group released their first full length studio album entitled "Everything I Need".  This was a collection of mostly Faith-Centered material that had been written and recorded over the previous 3-4 years.  Their second release, "In Red and Blue", came out in 2011 and highlighted the fan favorite "My Hero" and 13 other original country tracks recorded in Nashville.  Their most recent album "No Tomorrow" is the result of the past couple years working with Kent Wells (Dolly Parton) and really shows a ramped up production value as well as some great new material.

Currently the band has just finished a brand new full-length album with Grammy-Nominated Producer Jeff Huskins and together they are forming a new production company and record label to launch the new album. 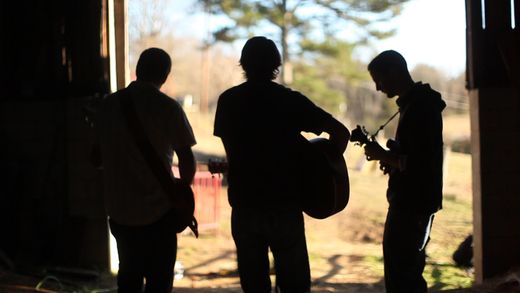